Did You Know That the Sun's Heliosphere is Actually a Magnetic Solar Bubble? 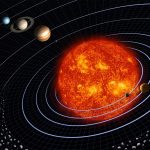 In its essence, the Sun is considered the heart of our solar system. From Earth’s standpoint, the scorching yellow star of glowing gases directly dictates its seasons, ocean currents, climates and aurorae. If the sun were the size of a front door, Earth would be about the size of a nickel. And without its energy, human life wouldn’t even exist. Crazy to consider, right?

However, that example only provides a slight sliver of the Sun’s impact. In actuality, it holds the entire galaxy in place, keeping everything from the largest of planets  – Jupiter, Saturn, and Uranus – to the smallest particles of debris in orbit within a magnetic field called the heliosphere that stretches 23 billion miles.

Modern science previously found that the heliosphere took the shape of a comet-like tail, but a pair of recent studies conducted by NASA are proving otherwise. The two studies – labeled the Cassini and Voyager missions – monitored the Sun’s 11-year solar cycle, and now suggest that the heliosphere is actually shaped like a circular magnetic bubble that surrounds the entire galaxy to shield it from harmful interstellar cosmic rays.

“This rough bubble-shape of the heliosphere is due to the strong interstellar magnetic field — much stronger than what was anticipated in the past — combined with the fact that the ratio between particle pressure and magnetic pressure inside the heliosheath is high,” said Kostas Dialynas, a space scientist at the Academy of Athens in Greece and lead author on the study.

WHY THIS IS IMPORTANT

The science community continuously studies the boundaries of the Sun’s heliosphere and any effects it has on shielding planets like Earth. Does this new shape directly correlate to an increase/decrease in its strength? Astronomers aren’t entirely sure, yet.

Studies have found that solar winds surrounding the Sun have decreased to all-time lows. This affects the heliosphere, which in turn can affect Earth and other planets in the solar system. With solar winds weakening, astronomers fear that the strength of the heliosphere will also decrease, leaving our solar system vulnerable to dangerous cosmic rays. Though because solar winds are cyclical, some scientists believe that instead of permanently decreasing, the solar winds are just experiencing a lengthy low period.
There are always new developments surfacing as NASA continues to analyze adaptations to the magnetic fields within our solar system, including those of Earth's moon and Jupiter's moon. So, be sure to keep up with our blog for the latest information!