Magnetizing Objects with a Bar Magnet 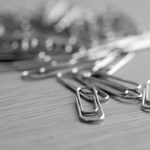 Is it possible to give objects that are not magnets the power of magnetism? That is the question that we are putting to the test in this magnet experiment! Read on to see how a magnet can turn a regular piece of steel or other metal into a magnet.

Metal objects that are not magnets can be turned into magnets. Was your hypothesis correct?

How does the magnetism work?

In magnets, electrons align in the same direction, giving them their magnetic energy. Magnetic metals also have electrons, but they arrange in different directions. When the magnet rubs against the metal object, it causes the electrons to align and magnetizes the object.

The object will hold its magnetism for a while. In order to demagnetize the object, you can hit it off of a surface. This causes the electrons to lose their magnetic alignment.