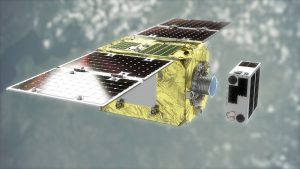 We’re all pretty familiar with the importance of sustainability. Picking up trash, recycling, reusing when possible, and decreasing our carbon footprint are all important ways to keep Earth’s environment balanced and healthy. What about beyond Earth’s surface though? Well, scientists have been developing a new form of environmentalism —space sustainability, and magnets are leading the new technology designed to clean up debris and dead satellites in space.

Learn how magnets can keep our outer environment as sustainable as our interior one.

Astroscale to the Rescue

Astroscale’s initial design of this “space-vacuum cleaner” is called End-of-Life Services or ELSA-d. The spacecraft was launched recently from Kazakhstan with the intention of testing its abilities. ELSA-d releases fake space debris with a magnetic plate already built in, and then works on grabbing it while both objects are in orbit.

In the long term, satellite companies can build the same type of magnetic docking plate into their own spacecraft and use Astroscale to remove satellites from orbit when they malfunction or break off. This will keep space clean of dead and defunct satellites as we continue to explore more outside Earth. The one problem? Space debris that’s already in the atmosphere (and lacking the appropriate magnet) cannot be picked up by the spacecraft. But the ELSA-d is a major step forward in making sure future satellites are responsibly taken care of when they go defunct—A win for space sustainability!

Keep Up With The Latest Magnetic News with Apex Magnets

As you can see, there’s so much to know about magnets! Check out our FAQ for answers to some basic magnetic questions as well. As always, we’re here to help answer any questions you may have about magnets. Just give us a call or email us!