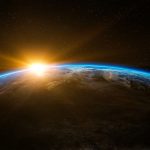 At one point in time, Mars – arguably the most similar planet to Earth in our solar system –  wasn’t the frozen desert we know today. In fact, researchers suggest that oceans and rivers once existed on its surface before solar winds from the Sun completely wiped them out.

Mars’ magnetic field is believed to have disappeared over the span of 100 million years. Without it, the planet could no longer protect itself from solar winds and – in turn – all water disappeared.

With 70 percent of its surface covered by water, Earth obviously doesn’t have that problem. The planet’s powerful magnetic field allows it to travel through dark space at 67,000 miles-per-hour virtually unaffected by plasma particles ejected from the sun. But even calling the magnetic field powerful doesn’t do its strength complete justice.

For a better depiction, envision an ocean at night during a dark and turbulent storm. That’s space. Earth, on the other hand, is a speeding boat fighting its way against harsh currents to remain afloat. The boat relies on its back-end bow to rip through the water as it moves forward through crashing waves. Earth’s magnetic field is that shredding machine. Researchers call it the “bow shock” theory.

Researchers have long suspected that we can thank this bow shock for reducing the scorching solar wind into the mild breezes we feel on Earth.

"As the solar wind crashes into Earth's magnetic field, the bow shock protects us by slowing down this wind and changing it to a nice, warm breeze," lead study author Li-Jen Chen, an astronomer at the University of Maryland, said in a statement. "We now have a better idea how this happens."
For more science-related information with magnetic force, like how magnets can protect astronauts from the solar wind, be sure to follow along with our Apex Magnets blog!