The Long Relationship Between the Moon and Magnetism 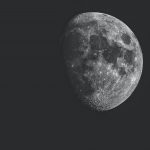 While the moon doesn’t have its own magnetic field—anymore—the moon and magnetism do go hand in hand. From meteors, plasmas, and the moon being part of Earth once, there have been a lot of discoveries in terms of the moon and magnetism! Here, we’re rounding up the articles we’ve written on the topic.

How The Moon was Formed

Billions of years ago, when our sun was still in its infancy, space dust and gases started gathering to form celestial bodies—aka the planets, including Earth— however, some of them didn’t come to orbit. As a result, these masses were sent rocketing through space, with one of these masses smacking right into Earth, breaking a piece off. Thus, the moon was born from the hunk of rock that split from Earth.

Scientists theorize that Earth’s magnetic field is propelled by the dynamo effect. Essentially, the outer core—made of molten iron ore—rotates in the opposite direction of the surface, creating our magnetic field. Since the Moon is part of the Earth, scientists have theorized that the moon then had its own magnetic field. So, how did the moon lose it? Going back to the dynamo effect—the dynamo we have on Earth relies on immense pressure and heat to keep the outer core in a liquid state. Conversely, the moon’s core can not maintain these essential elements. So, as the core cooled and the dynamo slowed down, the moon’s magnetic field steadily weakened until it disappeared for good.

Why Would the Moon Want a Magnetic Field?

Without a magnetic field, which we theorized the effects in this blog post, Earth would go unprotected from a number of things, including space rocks and charged particles of solar winds and the possibility of solar winds emitting cosmic radiation on Earth. In short, the magnetic field of Earth is a necessity for life to happen. So, scientists theorize that the Moon losing its magnetic field could be the reason it’s inhabitable today.

Recently, lunar rocks retrieved by the Apollo missions were found to contain remnant magnetization that formed 4 to 3.5 billion years ago in a magnetic field comparable in strength to that of the Earth. Simulations rule out plasmas caused by meteoroid impacts as the source of lunar magnetism, supporting the proposal that the ancient moon generated a core dynamo.

We wish it were that simple though. As it turns out, scientists now have research that indicates that the moon’s suspected core may not have been able to actually create enough energy to ever sustain a magnetic field like once thought with the dynamo effect.  Now, research scientist Rona Oran and professor of planetary sciences Ben Weiss of the MIT Department of Earth, Atmospheric and Planetary Sciences have brought up another hypothesis — one that’s actually been around in the 1980s. Perhaps the magnetization in the lunar crust is a result of transient plasmas generated by meteorite impacts.

Now, we’ve covered this topic of meteors being behind the Moon’s magnetic field before, which you can read here. Here are the basics: — meteors are common in the solar system and since the meteors aren't stopped by any atmosphere, they make it to the moon’s surface often. These collisions with meteors is thought to be the reason why the moon has so many craters. Now, many of these meteors are magnetic, so, as they slam into the moon, these chunks of space rock and the ground below are heated to the point of melting.

At these temperatures, the already occurring magnetism in both the meteorites and moon rocks realign in a single direction. It then stands to reason that bigger craters are more magnetic because they were hit with bigger meteors made of more magnetic materials. This theory might settle debates within the astrophysical community but, scientists have been perplexed by the moon’s numerous magnetic anomalies for a long, long time.

As you can see, there’s still a lot to learn about the Moon and it’s magnetism. Keep up with the latest updates and research by signing up for our monthly newsletter or keeping up with the Apex blog!