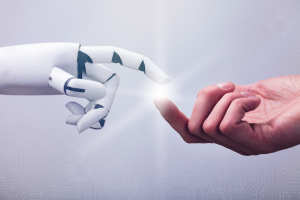 After researching subtle changes in surrounding magnetic fields, a team of researchers from the City University of Hong Kong (CityU), South University of Science and Technology in Shenzhen, and Carnegie Mellon University (CMU) of Pittsburgh has developed a new technology for robotic fingers. The fingertips have a soft tactile sensor with skin-comparable characteristics.

This discovery is believed to be a stepping stone into making ultra-sensitive prosthetic hands, as well as other applications in the robotics field. One of the most interesting findings is that by having this sensor at robots’ fingertips, they will accomplish “human” tasks that are challenging, such as gripping fragile objects, threading a needle, and more.

What is This Magnetic Skin

The sensor is in a multi-layered structure, similar to human skin, which includes a flexible and “sinusoidally magnetized flexible film” with a thickness of around 0.5 millimeters. Lead researcher Youcan Yan explained: “The ‘skin’ of the robotic fingertip is made of a flexible magnetized film, which generates a magnetic field within the device. The supporting “bone” of the finger is a circuit board, which is studded with sensors that monitor the magnetic field. If you jab, say, a pencil eraser into the fingertip, the magnetic skin depresses and the finger’s magnetic field subtly changes, which the sensors analyze to determine where the eraser is making contact. If you slapped these fingertips on a humanoid robot, the machine would be able to localize where its fingers were making contact with an object, improving its grip.”

Importantly, this algorithm is said to “be able to improve the physical resolution of a tactile sensor array with the least number of sensing units, thus reducing the number of wirings and the time required for signal transmitting.” You can watch a video of this in action via Inceptive Mind here.

Feeling pain is necessary for humans to survive — when you touch a hot pot on the stove, you know to move it away. If you didn’t feel that burning, you could leave it there and cause more damage. In human skin, specialized sensory cells in the skin called mechanoreceptors work with the nervous system. Combined with thermoreceptors (which sense temperature) and nociceptors (which sense pain), you can manipulate the world around you without hurting yourself.

Though these sensors are the most “life-like” thus far, the absence of pain receptors is still a big step. There have been some ethical dilemmas; some professionals say it would be unethical to inflict pain on subjects willingly. Luckily, some research shares how we could enhance human capabilities by not needing the sensors to sense pain. Instead, we might be able to use sounds or lights as a warning measure. Improvements like these will only enhance prosthetics technology.

Further studies will be conducted to increase prosthetics’ humanness, such as gripping a glass tighter as more water is added, holding onto a slippery dish, or even holding objects like an egg without breaking. To be in the know about magnets, magnetic breakthroughs, and industry news (as well as getting some really great discounts), subscribe to our newsletter or check out our blog.