Two Things You May Not Know About Earth’s Magnetic Field 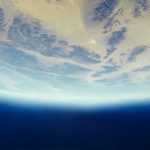 If you didn’t know already, the Earth is a giant magnet. Its magnetic field comes from its core being solid iron, with molten metal surrounding it. This magnetic field acts like a protective shield around the planet, trapping and repelling charged particles from the Sun. There’s a lot to learn about Earth’s magnetic field, with new discoveries being made almost yearly! In this blog post we’re covering two things — the “dent” in the magnetic field, and how the field flips.

The Earth’s Magnetic Field is Dented

Earth’s Magnetic Field is known to have a weak spot, called The South Atlantic Anomaly (SAA). This spot stretches across the Atlantic Ocean from South Africa into Brazil, aka the size of the continental US. In this area, the magnetic field is weaker than normal, resulting in a “dent,” which you can read all about in this previous blog post.

Currently, we’re safe from any effects this dent has on the ground, but, our satellites aren’t so lucky. There’s also reason to believe that this dent in the magnetic field is only getting bigger. So, what does this mean? When satellites zip through the weak spot, they are bombarded with radiation more intense than anywhere else in orbit, essentially being unprotected by the magnetic field. Research groups and a host of NASA scientists in geomagnetic, geophysics, and heliophysics keep a close eye on the SAA to monitor and predict future changes and help prepare for a safer future for satellites.

The Magnetic Field Has Reversed...Hundreds of Times

The magnetic field reversing may seem alarming — many ‘doomsday’ theories come from the fear of pole reversal — but, rest assured, it doesn’t signify the end of the world. Now, the phenomenon of poles reversing doesn’t occur on the regular though, with scientists estimating reversals have happened at least hundreds of times over the last 3 billion years. For the past 160 years though, the strength of our magnetic field has been decreasing at a rate faster than usual.

According to Nature, Earth’s north magnetic pole is moving so quickly that the World Magnetic Model (WMM) needed to be updated only four years after its latest update.  Even though the 2015 update to the model was expected to remain valid until 2020, it’s close to exceeding the acceptable limit for navigational errors. So, updates were made and released in February 2019 — which we wrote about in this blog post here.

The most dramatic change that goes along with a pole reversal is the large decrease in total field intensity. The change isn’t sudden and happens gradually so there is never a time when the field isn’t strong enough to keep doing its job. Though, we have found that the weakened field allows for coronal mass ejections released by the sun to get through the earth’s shield easier, which can create holes in our ozone layer.

Stay tuned for part two of interesting things about the Earth’s magnetic field in the following weeks by keeping an eye on our news & how-to’s section of the blog. To make sure you don’t miss a thing, subscribe to our monthly newsletter and stay up-to-date!