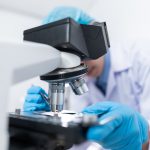 In an article published in the journal Science Robotics, the world was introduced to a new type of robot, one that can move underwater. Researchers at Northwestern University demonstrated how they used magnetic and light fields to make a robot not only walk underwater, but break dance as well.

It’s probably not the stereotypical hard metal robot you’re picturing though. This one is characterized by it’s soft exterior— making it the perfect aquatic robot to blend in with sea creatures. In fact, it looks a lot like an octopus!

The robot is only about 1 cm wide but it’s able to walk at the speed of a human and, as per the researcher’s demand, squeeze into small spaces and pick up, carry and release objects. Its ability to walk though water is all due to how it’s made. This soft robot is formed using hydrogel to enclose a frame of nickel nanowires and specially designed polymer molecules.

Usually the robot lies flat, but when it’s exposed to light, the molecules inside it become hydrophobic. This change in state means it will then repel the water around it, causing it to bend into a standing shape. Once the robot is upright, the researchers can then expose it to a rotating magnetic field to have the bot walk towards the source. It can then be deactivated by switching off the light, which relaxes it back into its old flat shape, being reactivated again simply by turning on the light.

What This Robot Can Do

This robot can do more than just walk — being capable of carrying objects by wrapping its legs around them and rolling about, releasing the cargo by inverting itself. It can also stick cargo to its back, resulting in something pretty funny– the robot starts ‘breakdancing’ or spinning to shake the object off.

As for the future of this little robot, the team of researchers say it could eventually be shrunk down and used to catalyze chemical reactions and pump out the resulting products, clean up water pollutants, or deliver drugs in the body.

We love keeping up with all things magnetic and sharing with all of you. Follow along with us by checking out our blog, and get to know more about the world of Apex by browsing our products to find the perfect fit for your next project!