Could Magnets Be The Solution To Cleaning Up Oil Spills? 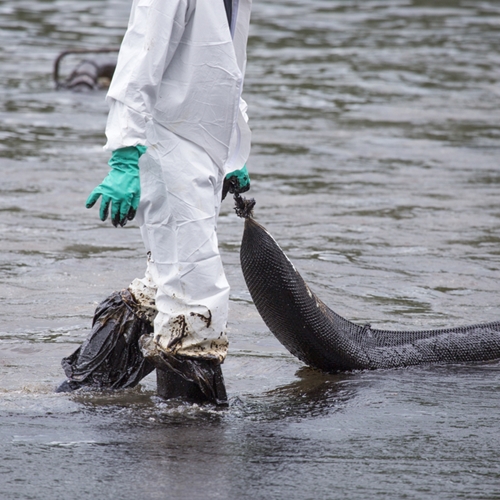 An oil spill can have a devastating impact on the environment and the creatures closest to it. For years, researchers have sought to find a method to quickly and thoroughly clean up after these unfortunate spills so as to minimize the damage. The more efficiently an oil spill can be addressed, the fewer animals will be harmed and the less pollution there will be. Now, researchers from the Massachusetts Institute of Technology have made an astounding discovery: Magnets may be the answer for improving the clean-up process.

You know how block magnets and cylinder magnets have the power to push or pull an object? Well, this technique uses strong magnets to pull oil out of water, which would not only prevent the substance from harming its surroundings or wildlife, but also recover the oil for later use. According to Eco-Business, the 2010 BP oil spill in the Gulf of Mexico cost a whopping $40 million, as the only methods available for clean up were relatively ineffective. That means that this new magnet development could have a whole host of benefits.

How does it work?
Oil is not a magnetic substance in itself. Eco-Business explained that MIT's technique would fuse water-repellant nanoparticles that contain iron into the oil plume. The magnet's force would then be used to draw the oil out of the water. All of this would happen on an oil-recovery vessel to ensure that the ferrous nanoparticles don't pollute the environment. Any seawater that has been contaminated with oil would be pumped onto the boat, and then the magnetic nanoparticles would be added. The magnets would be added to the water, and then the liquid would be filtered to separate the oil out. Finally, the now oil-free water would be put back into the sea, and the oil could be brought to a refinery for future use. Even the nanoparticles could be recycled after being magnetically removed. The result? A significantly less expensive cleanup process.

Why is it better than other methods?
There are an array of advantages to consider with the magnetic technique. Previously, the only methods available for resolving an oil spill were skimming, which involved extracting the oil off the surface of the water, and using chemical dispersants, which break up the oil. Both techniques have a catch, however. Skimming doesn't work as adequately in poor weather conditions, and chemical dispersants are dangerous to marine life. There is still some hesitance regarding the magnetic method, but the fact that it can recover oil for reuse has clear environmental and cost benefits.