What is the Hall Effect and How Does it Relate to Magnets? 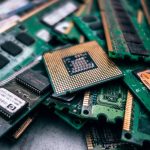 American physicist Edwin H. Hall discovered the Hall Effect in 1879 – almost 20 years before we discovered the electron. He was clearly a man before his time because it took several decades for people to catch up to his discovery and fully grasp or understand its importance. Now the concept is used to operate computers, cell phones, cars, and even exercise bikes.

How Does the Hall Effect Work?

Essentially, the Hall Effect shows how electricity and magnetism, when combined, can make an object move. For example, when you send an electric current through a coil of copper wire, you produce a temporary magnetic field around the coil. Electrons move through the coil in a relatively straight line. Then, if you place the coil near a permanent magnet, the field forces the electrons to deviate or bend away from their original path and attracts or repels the temporary field, causing movement.

Now, with more electrons on one side versus the other, there is a difference in potential called Hall Voltage. Its size is proportional to the size of the electric current and the strength of the magnetic field.

Using what is referred to as a Hall Effect sensor or probe, you can detect something’s distance, speed, or position. You can also use it to measure magnetism or Hall Voltage. Some people use the terms Hall Effect sensor and Hall Effect probe interchangeably; however, they refer to different things

The sensors are small, inexpensive, and more commonly used. Sometimes you will find them packaged into computer chips, which can be plugged into larger circuitry. You might also find them in car ignitions, computer keyboards, factory robots,  speedometers, anemometers, and even exercise bikes. On the other hand, Hall Effect probes are more expensive and typically used exclusively in a laboratory setting to measure magnetic fields with high precision.

Although Apex does not distribute electromagnets, we do have a wide assortment of permanent magnets you could use to test the Hall Effect or build a Hall Effect Sensor. If you would like to measure the strength of a magnetic field, you can also rely on our Digital Gaussmeter.

To discuss the possibility of using our magnets in conjunction with electricity, or to discuss the details of a specific product, please call at any time of the day: (1-304) 257-1193.