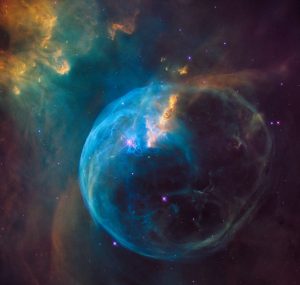 Have you ever wondered how planets form? So have scientists! Until now, scientists haven’t been able to figure out a solid reasoning for the creation of our solar system. In a recent study, a computer simulation shows that magnetism may be the "missing ingredient" in the recipe to make a planet that scientists have been searching for.

The Recipe for Making a Planet

Plainly put, our best theories for planet creation aren’t sufficient. The most commonly cited theory for how planets form (or core accretion) involves clouds of gas and dust. As we all know, the Sun was formed first — you can read about that in detail here — and the planets are thought to have come from the material in the nebula not absorbed into the Sun.

According to the most common theories, these materials swirled around the sun and collided over and over and over again. The object starts out as microscopic dust, but once the object gets big enough, gravity picks it up and continues to form into a bigger being, becoming a small planetesimal. If the collisions of planetesimals occur at the right speeds, it’ll combine with more objects and grow into a larger protoplanet, then a full-blown planet.

The issue with this theory is that it doesn’t account for winds. The dust and gas needed to make a gas giant like Jupiter and Saturn get blown out faster than a hefty, gassy world can form thanks to solar winds. Since these planets did form and not blow away into the nebula, there has to be something else in play. Surprise — it’s magnetism!

How Magnetism Comes into Play

A new study, published in Nature Astronomy in February, demonstrates that by taking magnetism into account, astronomers may be able to explain the striking diversity of planets orbiting alien stars. Why hasn’t this been thought of before? Including magnetic fields alongside gravity within computer models is a difficult task. In astronomy, said Meredith MacGregor, an astronomer at the University of Colorado, Boulder, there’s a common refrain: “We don’t bring up magnetic fields, because they’re difficult.”

Ravit Helled, a planetary scientist at the University of Zurich, along with her colleague Lucio Mayer and University of Cambridge’s Hongping Deng, used the PizDaint supercomputer — the fastest supercomputer in Europe — to run extremely high-res simulations that showed magnetic fields alongside gravity. They found that magnetism seems to have three key effects in planet-building. First, it’s already known that magnetic fields work as shields, but magnetic fields seemingly shield certain clumps of gas — that can make small planets — from the destructive influence of stellar radiation in particular. Second, magnetic fields form a “cocoon” and slow down the growth of what would be supermassive planets. The magnetic pressure pushing out into space “stops the infalling of new matter,” said Mayer, “maybe not completely, but it reduces it a lot.” Finally, magnetic fields stir gas up — in some cases, it disintegrates protoplanetary clumps, and in others, it pushes gas closer together to encourage clumping. These three things are what are believed to help to form planets vs giants.

Though the results are still fuzzy, even with the fastest supercomputer,  it can now be said that magnetism is an ingredient in forming the planets. This isn’t the only way magnets exist in space. Recently, we wrote about how dead satellites are being cleaned up with the help of magnets. To read more about what’s going on in space, read this blog here.