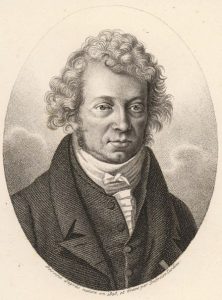 You may already be familiar with our latest magnetic personality feature as his last name, ampere — better known as just “amp”— is still used to describe the unit for measuring an electric current. Andre-Marie Ampere achieved great things during his lifetime in the field of magnetism, even founding and naming what we know today as electromagnetism. The more we learn about the pioneers of magnetism and related sciences, the more we can appreciate and understand it in our everyday lives.

Andre-Marie was born January 20, 1775 in Lyon France. His father, Jean-Jaques Ampere encouraged his son to forgo formal education and “learn from nature” instead. So, with the help of his father’s vast library, he taught himself, finding a particular interest in mathematics, and by the age of 12, he was already working with advanced mathematics. After the French Revolution, Andre-Marie took his first job as a mathematics teacher and from then on he continued to teach, eventually becoming an esteemed professor of chemistry and physics.

His Life’s Work and Legacy

Ampère’s research of electromagnetism began after his friend introduced him to a new discovery from Danish physicist Hans Christiaan Orsted about magnetic needles being deflected by an electric current. Using principles of applied mathematics and physical laws, Ampère showed that two parallel wires containing electric currents repel or attract each other, depending on whether they flow in the same or opposite directions. Further, Ampère’s law was created which states that the mutual action of two lengths of current-carrying wire is proportional to their lengths and to the intensities of their currents.

A lesser-known accomplishment is that he proposed a precursor to the electron, the “electrodynamic molecule.” In 1872, his magnum opus was published that coined the term electrodynamics and Ampère was established as its founder. After this impressive accomplishment, and contribution to the discovery of modern electrical science, an international convention established the ampere as a standard unit of electrical measurement, cementing his name in our everyday lives.

Want to stay up-to-date on the latest magnetic discoveries? Sign up for our newsletter to get these stories and more sent straight to your inbox each month.