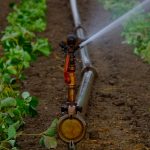 In agriculture, a high concentration of salt accumulation in the soil can decrease the value of farmlands and productivity — meaning less healthy or less abundant crops for farmers. Because of this, there is a need to reduce salinity in soil and “improve the leaching of salts below the root zones of salt-sensitive crops,” such as potatoes, tomatoes, and citrus fruits.

The Impact of Salt in Soil

Especially when irrigating crops with groundwater, you run the risk of distributing water containing high levels of saline. When salt dissolves in water, sodium and chloride ions separate and displace other beneficial mineral nutrients like potassium and phosphorus. The damage can appear as plant discoloration, delayed or diminished growth, and nutrient deficiencies.

For several years, magnetically-treated water (MTW) has been used by researchers and farmers alike to test and change the distribution and accumulation of salt in layers of soil. While there are numerous, varied reports of the success of these methods, it’s been observed that while MWT doesn’t change the chemical state of water, it does change its physical parameters — surface tension, viscosity, zeta potential, solubility, and diffusion. It is also shown to desalinate soil.

The magnetic component of the MTW system includes approximately 16 ring-shaped permanent magnets with 12 mm centers. These rare-earth magnets are then placed in two polycarbonate flanges and oriented 4 mm apart with polarities in opposition. The water then moves through the ring magnets. The magnetic field strength is measured by Gaussmeter, ranging from 3600 Gauss at the edges of the magnetic “tubes” to 700 Gauss near the center.

In a study from 2017, results showed the rate of salt accumulation was 1.70 times greater in the control group than it was in the MTW group — in other words, the group that used permanent magnets had less salt in its soil. Researchers also found that the MTW soil had a water holding capacity that was 25% greater than the control group. This means that by using MTW, you could actually conserve on water usage, which has a massive economic implication.

At Apex, we offer a wide selection of ring magnets that could be used in a series of processes similar to the one explained above. Of course, our line includes many different sizes like the 25 x 10 x 5 mm rings or the 4” x 2” x ½” ring. To browse our entire selection of ring magnets, explore our site. And as always, regardless of industry, never hesitate to reach out with questions.