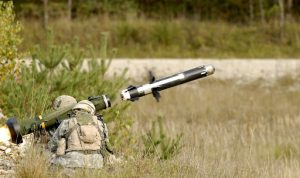 The United States military considers rare earth magnets, namely samarium cobalt and neodymium magnets, to be a key resource for defense and attack applications. That means they’re willing to spend an exorbitant amount of money to stay “on top” in terms of military defense and performance in the eyes of the world.

As mentioned, the military is primarily working with two types of rare earth magnets: samarium cobalt and neodymium.

Let’s start with samarium cobalt magnets. They have high coercivity, are resistant to demagnetization, and remain stable in extreme temperatures (ranging from -55°C to 300°C) and pressures. They are primarily used for guided missiles, satellite guided “smart bombs,” and aircrafts, including fighter jets.

Other ways samarium cobalt magnets are used in the military:

It’s important to note that samarium-cobalt magnets do have certain downsides, too, including their brittle nature. They are also generally more expensive.

Neodymium magnets are well-known for being the strongest, most durable magnet on the market. They’re relatively lightweight, making them useful for certain on-person defense equipment, weapons systems, computer programs, and disk drives. Even when materials are added to increase heat resistance (e.g., dysposium and erbium), they can only achieve working temperatures up to 200°C, which is less than samarium-cobalt; however, they can reduce carbon emissions and increase fuel efficiency when used for aircrafts.

Other ways neodymium magnets are used in the military:

We provide both samarium cobalt and neodymium magnets in various shapes and sizes. However, when the standard or basic options aren’t what you’re looking for, we also provide customization services. Quotes are free with absolutely no obligation to buy.