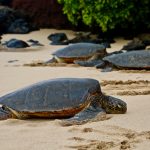 Previous studies have shown that sea turtles use Earth’s magnetic field to help guide them at sea, similar to how sailors use latitude and longitude. Loggerhead turtles, in particular, have been known to swim thousands of miles to lay their eggs on Florida’s Gulf, as well as Atlantic coasts. What’s interesting is that recent research has found that these nesting places are actually within about 40-50 miles of where the turtles were born decades earlier.

How Turtles Find Their Way Home

Scientists are now wondering if there’s a correlation between sea turtles using the Earth’s magnetic field and navigating back to the area where they were born. Dr. Kenneth Lohmann, a professor at UNC Chapel Hill, and senior author of the study, sea turtle expert J. Roger Brothers, set out to find answers using previously reported genetic information from more than 800 nesting Florida loggerheads. The results from their study, published in Current Biology, “provide evidence that turtles imprint on the unique magnetic field of their natal beach as hatchlings, and then use this information to return as adults,” says Brothers.

Earlier research has shown that the turtles can perceive both the magnetic field’s intensity and its inclination angle — the angle that the field lines make with respect to the Earth’s surface. The new study suggests that the turtles learned their home beach’s distinctive magnetic signature through geomagnetic imprinting. This study, however, showed more genetic similarity among turtles that nested on beaches with similar magnetic signatures than there was among turtles that nest on beaches that were physically close to each other. Plainly speaking, turtles traveled back to magnetically similar beaches to what they were born at versus nesting at places close to them, which is the assumed location. It’s expected that geographically close locations will be genetically related, and geographically distant locations will have distinct populations, but as Brothers said, “the variation in earth’s magnetic field around the nesting area seems to really predict genetic differentiation much better than geographic distance.”

Some turtles have been found to nest at multiple beaches in their lifetime, questioning Dr. Lohmann and Brothers’ findings. Mr. Brothers gives an explanation for turtles nesting at different points in their lives: “with magnetic fields running across the peninsula, individual turtles might be making navigational errors and nesting on beaches that are magnetically similar to their home beach.”

They tested to see if this theory held up — if turtles did use magnetic fields to find their way home, they should account for the shifts. This turned out to be the case. Some turtles traveled not to the exact location of their birth but to the magnetic signature where the shift occurred.

Why Is This Important?

This could also be an explanation for why some conservation efforts haven’t been successful. When using conservation methods, they typically use metal wire cages to relocate eggs, which could interfere with the turtle’s ability to match a magnetic signature. In addition, sea walls, powerlines, and large beachfront buildings may be messing with the magnetic field readings. Theoretically, turtles might be able to be “tricked” into nesting on certain beaches if the magnetic field of hatchlings were manipulated to convince them that they were born in a different location. The same concepts might be applicable for restoring salmon and other fish to rivers as many fish and birds also use magnetic fields for navigation.

Though exciting, this is all based on genetic data, not experimental, and Dr. Lohmann said a more definitive study probably wouldn’t be possible due to sea turtles’ 20 years of reproduction and only 1 out of 1,000 hatchlings surviving.