Inside A Bird’s Mysterious Magnetic Sense 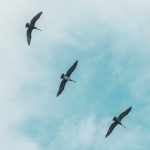 You might think that being able to see the world through an aerial view would be the only navigation tool birds need. However, a bird’s internal navigational system has something more complicated and fascinating going on. For years, scientists have theorized that migratory birds experience an innate phenomenon that allows them to ‘see’ the Earth’s magnetic field. Recently though, scientists at the University of Tokyo turned this hypothesis into actual proof.

Scientists knew that birds had an ability to sense the direction of the planet’s poles, but they weren’t able to prove a key reaction behind this skill. The team of scientists at the University of Tokyo though were able to find evidence of quantum physics directly affecting a biochemical reaction inside a cell—a breakthrough in this area of research.

They conducted their study using a tailor-made microscope that was sensitive to small flashes of light. Then, they observed as a culture of human cells that contained a special light-sensitive material reacted directly to changes in a magnetic field. This response seen in their study correlates with what would be expected if a strange quantum effect was responsible for the light reaction.

At this point, you may be wondering how exactly cells are able to respond to a magnetic field. Scientists have many hypotheses, but most commonly regarded is that it’s caused by a distinct quantum reaction involving a type of photoreceptors called cryptochromes. Cryptochromes are involved in regulating circadian rhythms and used in the sensing magnetic fields in a variety of species, including dogs and birds. It’s likely that even our own cells contain these special photoreceptors and that unconsciously, humans are capable of detecting Earth's magnetism!

You can read more about the study of cytochromes in relation to magnetic fields here.

There are scientific breakthroughs happening all over the world. But, you only need one place to get all your magnetic content—Apex. Check out our magnet facts section of our blog to stay up-to-date on the latest magnetic discoveries.