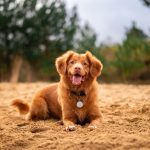 Your furry best friend may have a sixth sense you don’t know about. That’s right, a recent study led by zoologist Hynek Burda, discovered that dogs can sense the Earth’s magnetic field and use it for navigational purposes. When doing their business, dogs seem to be aligning themselves facing North or South along the magnetic fields, meaning, the way they mark their territory may not be random at all and it may help them find their way.

It’s no secret that dogs have a superior sense of smell, but their talents seemingly don’t end there. Recent studies suggest that they’re able to navigate unfamiliar terrain and find shortcuts back by using more than their noses but actually using the Earth’s magnetic field. The saying that “dogs always find their way back home,” may not just be a saying any more thanks to their ability to perceive the magnetic field!

The information found by Burda’s team is integral to understanding magnetoreception in all mammals. Need a refresher on magnetoreception? Check out this previous Apex blog. Some of Burda’s previous work has shown that cows, deer, and foxes are also sensitive to Earth’s magnetic field. However, this is the first study that exhibits a mammal not just being able to sense it but also demonstrating a specific behavioral response to it.

More on The Study

In Burda’s study which occurred over a two-year period, researchers analyzed the body orientation of 70 dogs from different breeds as the dogs did their business. Initially, their findings failed to show any distinct pattern of dogs preferring a specific orientation when they do so.

Yet, when the researchers factored in the naturally occurring variations of Earth’s magnetic field and other weather factors, a pattern emerged. Under stable magnetic conditions, the dogs in the study would always do their business while facing either North or South. Researchers say this provides enough evidence to claim that dogs can sense magnetic fields and are sensitive to even small magnetic-field variations as well.

Burda’s study gives a lot of important information about magnetoreception, a sense which allows an organism to detect a magnetic field in order to perceive direction, altitude, or location, but more research is still needed. Including the question of what else are dogs able to do with this sense? And, further analysis into how exactly other factors such as weather can affect the phenomena.

Stay up-to-date on all things magnetic by following along our magnet facts, magnet experiments,  or fix it with magnets sections of our blog!