Manipulating Magnets at an Atomic Level 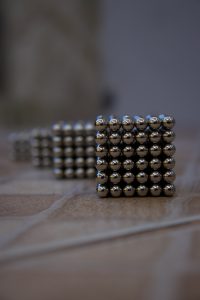 We already know that magnets are found all around us from the obvious fridge magnets to being in many day-to-day appliances and in cloud storage data, such as Google or Amazon!

Background on the Study

The team of researchers includes Dr. Rostislav Mikhaylovskiy from Lancaster University, Dr. Dmytro Afansiev from Technical University of Delft, and others from Nijmegen, Liege, and Kiev. Magnetic materials host trillions of mutually aligned elementary magnetic moments or “spins” whose alignment is largely governed by the arrangement of the atoms in the crystal lattice. The spins can be thought of like compass needles, being typically depicted as an arrow showing the direction from North and South Poles. In magnets, all springs are aligned the same direction called exchange interaction. As per the SpaceDaily, this is one of the “strongest quantum effects responsible for the very existence of magnetic materials.”

As the demand for these magnetic data processing cells increases, scientists are eager to find a way to manipulate the magnetic state so that they can further control magnetism.

In the study published in Nature, researchers were able to “extensively disturb and distort” the crystal structure of magnetic material by using “ultrashort laser pulse excitation as the stimulus to optically stimulate specific atomic vibrations of the magnet.” They noticed the change in magnetization last a a very short period of time (less than a few picoseconds — which are a millionth of a millionth of a second!)

Dr. Rostislav Mikhaylovskiy from Lancaster University explains: "It has long been thought that the control of magnetism by atomic vibrations is restricted to acoustic excitations (sound waves) and cannot be faster than nanoseconds. We have reduced the magnetic switching time by 1000 times that is a major milestone in itself."

Dr. Afansieve further said that the recent findings are going to lead to further research into the understanding of the exact mechanisms behind the “ultrafast lattice control of the magnetic state." Following the shaking, the magnetic system of the antiferromagnet changes, such that a net magnetization appears—for a fraction of time, the material becomes similar to the everyday fridge magnets.

What This Discovery Means, and More with Apex Magnets

This manipulation of magnets is expected to help scientists work on better and energy-efficient data processing technologies in the coming years. We are constantly on the lookout for new magnet discoveries. For more updates, browse our neodymium magnet information and magnet facts sections of the blog or subscribe to our newsletter today!